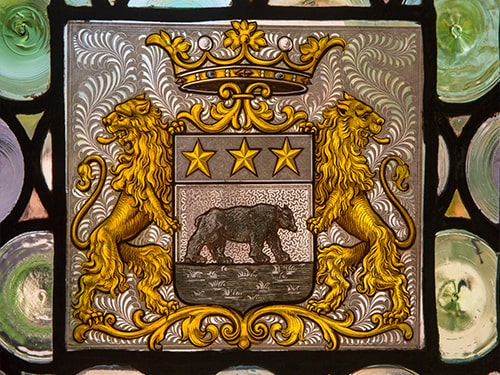 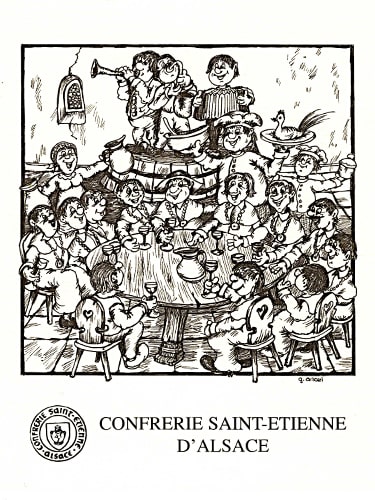 The Confrérie Saint-Etienne, one of the oldest wine guilds in France, was founded in Ammerschwihr in 14th century to oversee the quality of local wines. Its annual banquet on 26th December (feast of St. Stephen/St. Etienne) became so famous that people began to refer to the “Saint-Etienne guild”.

After a distinguished history, and like most craft guilds after the French Revolution, it went to sleep in 1848, but was revived in 1947 by Joseph Dreyer and a group of Alsace wine lovers. In 1973 the Confrérie bought the Château de Kientzheim, a 12th century castle rebuilt in 1563 by the celebrated Baron Lazare de Schwendi. The Château hosts the official chapters, theme tastings, wine education courses and other gastronomic events. It also houses the Alsace regional wine museum.

The Confrérie treasure is its specially-built Oenothèque (wine library), a unique collection of more than 60 000 bottles of Alsace wine dating back to 1834, and also one very special bottle of wine from 1472, donated by the Hospices de Strasbourg… ! Since its statutes were first established back in 1561, the role of
the Confrérie has always been to oversee and guarantee the quality of Alsace wines by awarding its official seal or “Sigille” to wines that are selected by blind tasting as “exceptional”, and to promote Alsace wine and food culture in France and around the world in a non-commercial and impartial way.

Delegates in various countries around the world keep our overseas members in touch and organize local events. The Confrérie itself coordinates annual chapters in Belgium, Holland and Sweden and occasional chapters in several other countries in Europe like Germany, Ireland, Malta… 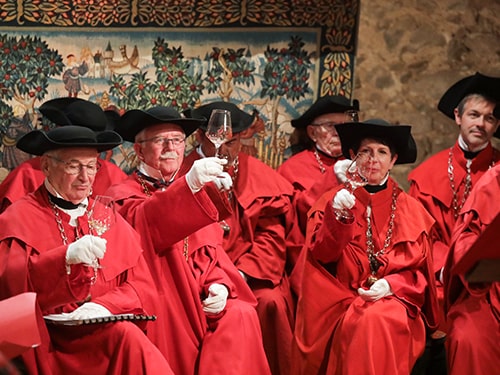 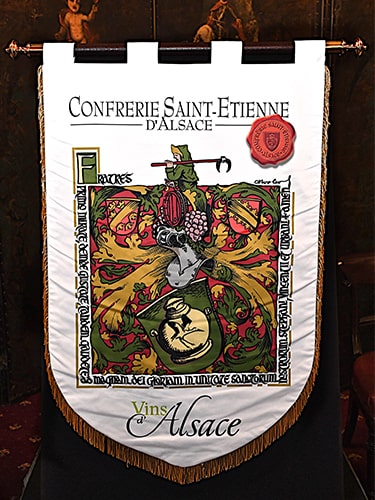 To understand the spirit of the Confrérie Saint-Etienne, Article One
of its regulations is eloquent enough:

« Nobody may become a member of the Confrérie Saint-Etienne unless he or she loves joyfulness, good food and Alsace wines. Nonetheless, admission of a candidate will only be granted after submission of a justified application by an approved member and approval by the Grand Council, who will oblige the candidate to undertake a formal and vinous admission test… »

The Confrérie Saint-Etienne brings together all those who appreciate Alsace, its wines and its gastronomy.

The rank of each member of the Confrérie (male Confrères and female Consoeurs) is easily identifiable by the colour of the ribbon they wear, each adorned with a medallion and a small wooden barrel. The ranks are, in ascending order of seniority, Apprentice (sky-blue ribbon), Companion (scarlet ribbon) and Master (green ribbon). Each rank is attained by passing a wine blind-tasting test during one of the Official Chapters. The tests become progressively more difficult, and one full year must pass before a candidate is allowed to take the next test.

Two trade-specific ranks have also been created: Vigneron (gold and red ribbon) for winegrowers and Senechal (white and gold ribbon) for gastronomy professionals. 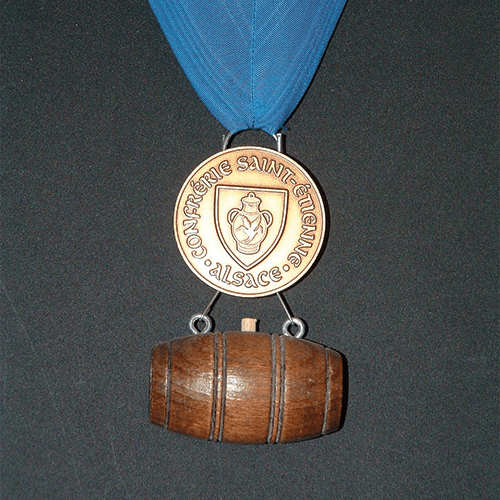 Nobody may become a member of the Confrérie Saint-Etienne unless he or she loves joyfulness, good food and Alsace wines…

These conditions, imposed by Article One of the 1561 statutes that are still in force, are enough for any candidate, when proposed by an existing member, to apply for the introductory grade of the Confrérie, the Apprenti (Apprentice).

At an official chapter, and after successfully passing a blind tasting test (to compare two wines of opposing characteristics), the candidate will be ceremonially inducted into the Confrérie by the Grand Councillors in their traditional red robes, receiving a ribbon and a diploma.

Confrères and Consoeurs Apprentis, identified by their sky-blue ribbon, medallion and barrel, become veritable ambassadors for the quality and typicity of Alsace food and wine culture.

As full members of the Confrérie, and by paying an annual membership fee, they can participate in tastings, wine and food events, overseas trips and chapters, and hopefully in turn encourage other fans of Alsace wine to become members.

At least one year after becoming an Apprenti, it is possible to apply for the rank of Compagnon, distinguished by a red ribbon, by identifying 4 Alsace grape varieties at a blind wine tasting test. 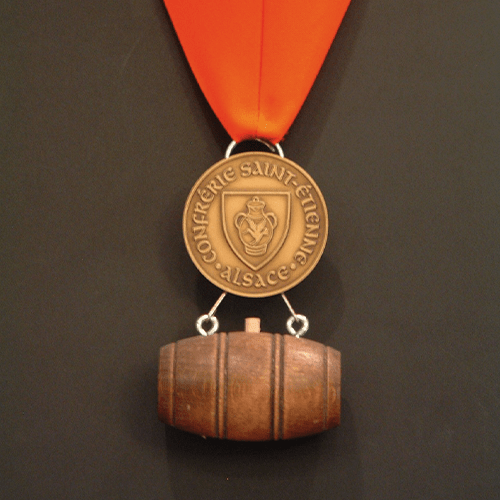 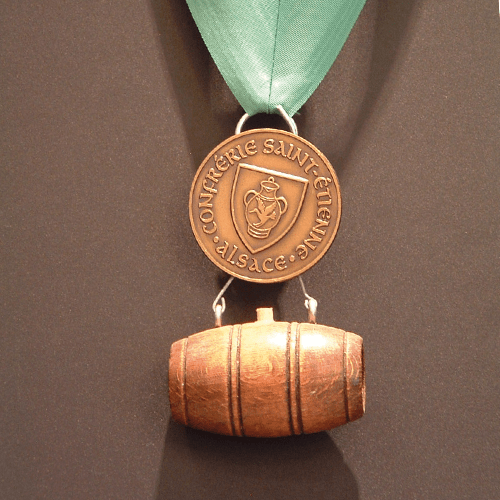 Identified by a green ribbon, Maître (Master) is the highest grade of the Confrérie. A blind tasting test, taken at least one year after achieving the rank of Compagnon, involves the evaluation of 3 Alsace wines and the correct indication of their grape variety and vintage.

Created in 1999, the rank of Sénéchal symbolizes the common purpose between the Confrérie Saint-Etienne and professionals of gastronomy to promote the fine wines of Alsace and the quality food products of the region. At a blind tasting of 3 Alsace wines, the candidate must identify the grape variety and the vintage, as well as suggesting a suitable food pairing for each.

Successful candidates are ceremonially awarded their white and gold ribbons during a chapter, by members of the Grand Council in their traditional robes, swearing allegiance to the fine wine and food of Alsace as symbolized by the Sigille awarded by the Confrérie to exceptional Alsace wines.

A Confrère/Consoeur Sénéchal can participate in tastings, wine and food events, overseas trips and chapters, invite guests and use the facilities of the Château de Kientzheim at a preferential rate. 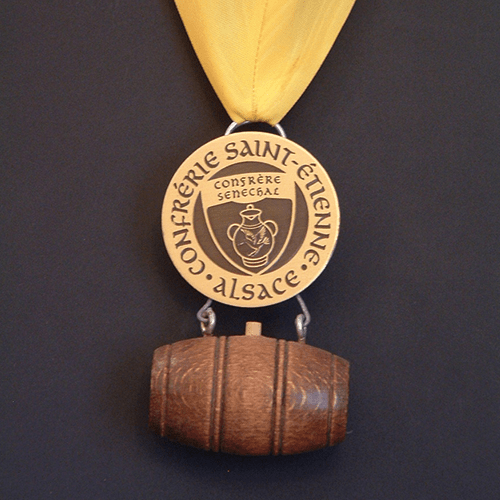 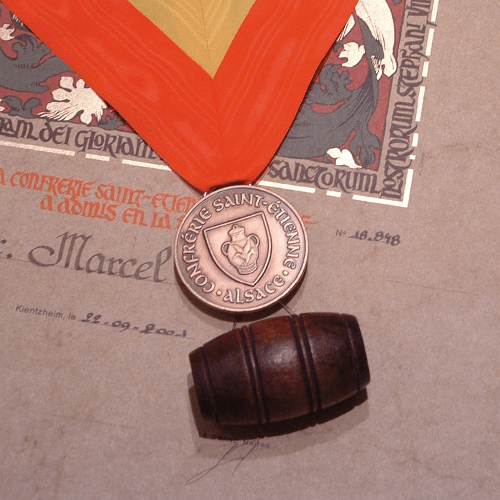 Identified by their gold and red ribbon, the two colours of wine, a Confrère/Consoeur Vigneron (winegrower) member of the Confrérie can participate in, and invite customers to, the wine and food-related events at the prestigious Château de Kientzheim, and use all its facilities.

More importantly, they can present their finest wines for selection at the annual blind tastings at which exceptional wines are awarded the Sigille (seal) of the Confrérie and take part as members of the jury. 12 bottles of each selected wine will be placed in the Oenothèque of the Château and so perpetuate the ongoing, living memory of Alsace wines from 1834 to the present day.

The Grand Council can choose to bestow the highest honorary distinction of Confrère/Consoeur d’Honneur (or Sénéchal d’Honneur depending on their profession) on any individual who has demonstrated devotion in the service or the promotion of Alsace wine, gastronomy or culture.

After having tasted two Alsace wines and explained why they prefer one to the other, the new honorary member is awarded a green and red ribbon and invited to drink from the ceremonial “loyala”, a small barrel of wine reserved for members of the Grand Council. 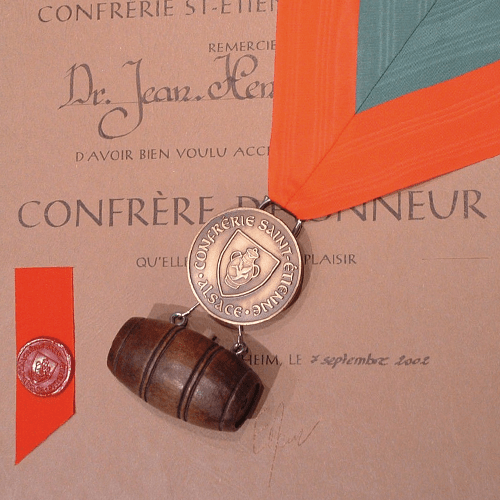 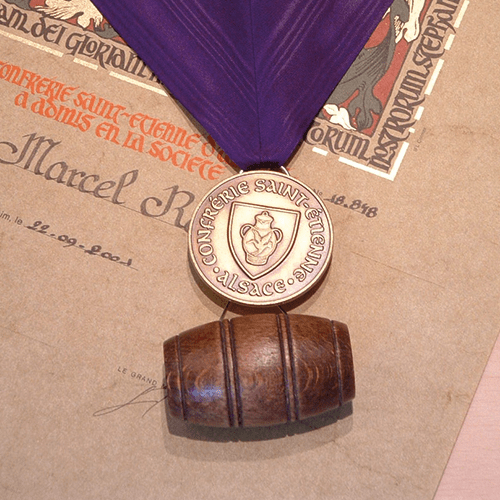 The distinction of Confrère/Consoeur Oenophile (friend of wine) or Gastronome (in accordance with their profession) is bestowed by the Grand Council to reward personalities who have worked hard to promote the fine wines and gastronomy of Alsace and who share the Confrérie’s ideals.

In the presence of the Grand Council, and after having explained their preference for one of two Alsace wines served blind by the Cupbearer, Oenophiles are awarded a purple ribbon.

The Confrérie is presided by the Grand Master, elected by his peers for one single year of office, as head of the Grand Council (to which women were first elected in 1997), and it is administered on a day-to-day basis by the honorary Executive Chancellor who is assisted by the full-time General Manager. The Grand Chamberlain officiates at intronisations and ensures the respect of tradition, along with the Master of Ceremonies. The Macebearer enforces discipline, while the Cupbearer serves to his colleagues the wines that have been entrusted to the Master of the Oenothèque. Finally the Herald proclaims the traditional harangue at the end of each session.

The Junior Council, headed by its Major, elected for one year by his or her peers, consists of future members of the Grand Council aged less than 40. They take a very active part in all the activities of the Confrérie, and are in particular responsible for logistics and for the organisation and upkeep of the Oenothèque (wine library).

Find all our events, our workshops ...